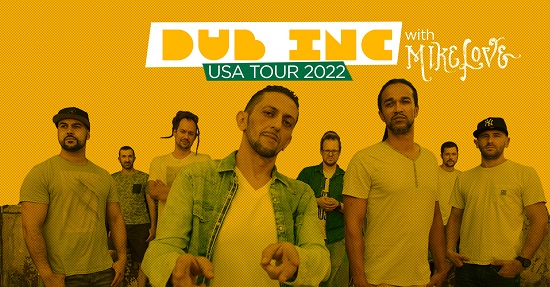 The prominent international reggae band, Dub Inc. is excited to announce their 2022 Spring West Coast U.S.A. tour! It has been over 10 years since the French superstars have been in the United States and they are beyond excited to return once again. Kicking off in May at the 11th edition of California Roots Festival, Dub Inc will embark on their debut West Coast tour with Hawaii’s own Mike Love!

In 2011 Dub Inc first came to the United States for their debut East Coast tour where they dazzled audiences with their unique blend of reggae, dancehall and world music stylings. It was a major milestone and dream for the seven piece band who began in high school in 1998. They are fronted by the singers Bouchkour and Komlan whose vocals and lyrical prowess embody the band’s diverse but complementary influences. Embodying a universal message whether the song is French, English or Kabyle (an Algerian language), their music is influenced by their diverse backgrounds and they are upfront with topical issues like how important acknowledging mixed race and mixing of styles are to honoring one’s heritage.

With their largest audiences in Europe, Africa and Latin America, Dub Inc is an international sensation selling out concert halls and headline festivals. They typically perform for audiences in the tens of thousands all over the world and are looking forward to growing the U.S. fan base. The idea of the U.S. tour first came about with their collaboration with the renowned band Stick Figure. Dub Inc had invited Stick Figure to join them on a European tour. The fantastic pairing yielded an amazing line-up which won the hearts of fans and critics alike. It was there that the U.S. tour was seeded, Stick Figure invited Dub Inc to come to his home state California and beyond for a West Coast run. Once connected with Stick Figure’s team at Ineffable Music Group, the plan for their US return was laid. Thomas Cussins, head of Ineffable comments, “Dub Inc is one of the greatest reggae bands in the world. Their incredibly tight sound is captivating, regardless of language there is no barrier to enjoyment and the beats are sure to keep everyone dancing. I am looking forward to seeing Dub Inc take over in the U.S. and I will certainly be at many shows to enjoy the music!”

The band will be performing in support of the iconic reggae artist Mike Love. Dub Inc bonded with Mike Love while on tour in France in December 2019, both sharing similar passion for positive and powerful messages. The band is delighted to reconnect with Mike Love in California commenting, “Dub Inc is one of the most passionate and energetic live bands I’ve ever seen. Their show is very fluid and dynamic, with powerful grooves and intimate ballads. American audiences are gonna go nuts for it. I can’t wait to  be there!”

Dub Inc shows will feature a blend of classic hits and new material. They will be touring with the full band and audiences will be able to hear and enjoy the songs as intended. The tour starts at Cali Roots on May 28th, from there they head to Oregon and Washington with performances in Seattle, Portland and Tacoma. Then back to Nor Cal for a show at the Cornerstone in Berkeley and Mystic Theatre in Petaluma, before they head to So. Cal to hit L.A. and San Diego.

With a catalog of over 9 records, three of which went Gold, and a handful of riddims, fans will be captivated and moved by Dub Inc’s range. Most recently the band released “Resist and Fight” riddim produced by Collie Buddz that appeared on Cali Roots Riddim 2020, and also their critically acclaimed political album Millions (2019) that confronts current cultural themes of borders, critical thinking, and political authenticity.

Reflecting on their journey the band commented, “We’re really happy to go on this tour, it’s a dream come true. We’ve been waiting for it since 2020 (it was postponed twice). We’re particularly excited because we love to surprise people with our performances and having new audiences discover our music. It’s a real pleasure to go back to the basics and to have to win over an audience that doesn’t know us.”

They continue, “We’re really looking forward to finally meeting the Californian audience!
New York ten years ago was a real success and we’re more than excited to come back to the United States!”

Catch the full tour here and see below for an overview of the U.S. dates.