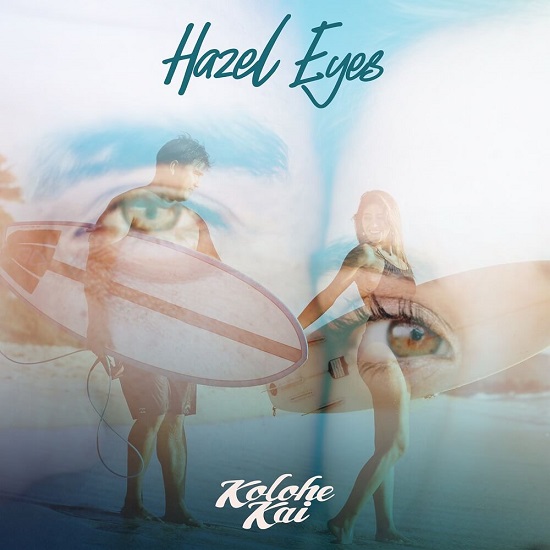 Years in the making, “Hazel Eyes” captures Kolohe Kai’s emergence in life. The album is inspired by his life passions. He explains, “From the ocean with its soothing power, to the faith that anchors my soul. From my intense desire to help others feel beautiful, to my vows to the greatest wife in the world. This album represents all of me. Every crevice of my heart was emptied into these lyrics. The journey of these past few years has been a hike to remember, filled with important lessons. I hope it inspires anyone listening to grab hold of true love and happiness.”

In addition to the ten original tracks, for the first time ever Kolohe Kai includes on the album one cover song, a reggae rendition of Stevie Wonder’s classic Isn’t She Lovely. The album includes previously released hits such as island reggae/pop track Catching Lightning and HIRIE-assisted Feel The Sunshine. “Hazel Eyes” features a well-balanced range of moods. There are heavier tracks like Circus Slave, inspired by the struggle of being an entertainer; and Always By My Side which Kolohe Kai wrote after his 2016 car accident. The album also encapsulates more light-hearted tunes like Blame it on the Waves and Gravity. The heart of the album comes from its title track, Kolohe Kai’s most personal love song ever written, dedicated to his wife.

“Hazel Eyes” was recorded with multiple producers at different studios, all of whom Kolohe Kai has worked with before. Each producer was carefully selected to deliver a sound unique to the songs in which they worked on. The producers on the album include Imua Garza, Kapena De Lima, Noah Cronin, and Brian Kierulf. Kolohe Kai explains, “All of these producers played a huge role in my fourth album, “Summer To Winter” so I knew that I could trust them to deliver a certain sound I wanted for each song.”

For years Kolohe Kai has made music to uplift others and bring positivity to the world. His latest release from the album I think You’re Beautiful encompasses an empowering anti-bullying message. Along with the song, Kolohe Kai launched an anti-bullying campaign visiting schools to promote inner-beauty and kindness. He has also partnered with Hawaii’s Dept of Health, Child & Adolescent Mental Health Division, for Children’s Mental Health Acceptance Month.

Kolohe Kai is excited to unveil his highly-anticipated album “Hazel Eyes” on June 3rd. He concludes, “I hope that people enjoy this new album and draw the much needed joy and comfort from its lyrics. We’ve been through a lot as a people and a community. The past couple years were not easy and so it is my heartfelt desire that this album brings happiness to everyone.” Kolohe Kai will be touring in celebration of the new album in September. Check out the dates below (more dates TBA). Save & download “Hazel Eyes” here: https://ffm.to/hazeleyes.