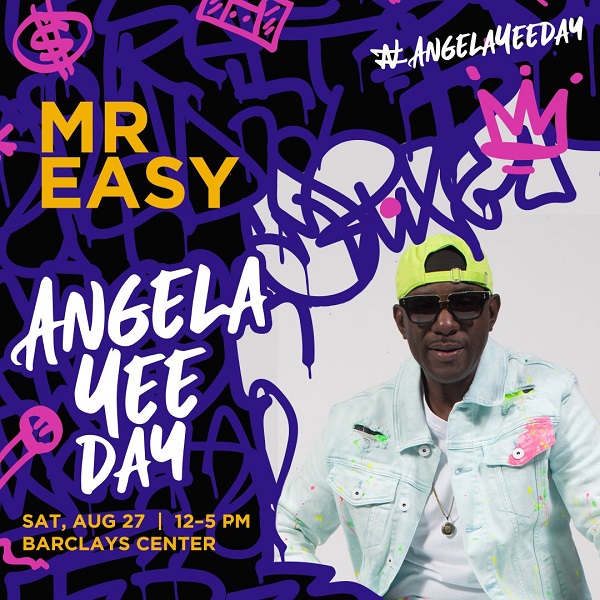 The legendary Mr Easy is slated to perform at Brooklyn’s Barclays Center for “Angela Yee Day” on Saturday, August 27! The highly anticipated appearance by the international Reggae and Dancehall act follows a groundbreaking performance at Reggae Sumfest with the “Magnificent Seven” during the iconic musical “Mad House” tribute to mega producer Dave Kelly.

Mr Easy, who rose to fame in the 90’s and 00’s with a slew of genre-defining hits, is thrilled to perform at the 4th Annual event, which is produced by award-winning media personality and “The Breakfast Club” co-host Angela Yee, in partnership with iHeartMedia and The Social Justice Fund. For the concert, the music giant joins an awesome line up of Caribbean entertainment heavy hitters, which includes Nadine Sutherland, Fay-Ann Lyons, Prince Swanny, Ishawna, Mr. Killa, Bunji Garlin, Motto and more!

“I love music and the community without a question,” says Mr Easy. “I think that what Angela Yee and her partners are doing is a true testament to their community commitment.”

“I moved to Brooklyn, New York as a teen from Jamaica, so I am proud to represent both homes with my performance….’unno’ get ready,” says the singer.

The renowned artist, who is truly one of the most humble talents a fan will ever meet, has been leaving an indelible mark on Reggae and Dancehall music and culture for over 30 years! His extensive repertoire includes the blockbuster “Drive Me Crazy,” “Rain Again,” “Murder,” “Bashment Time,” “Funny Man,” “A Who,” “Strangest Thing” and more! The accomplished entertainer was the first Reggae singer to win “Showtime at the Apollo.” And as a result was signed by Quincy Jones to Quest Records/Warner Bros. Notably, his music can be heard in the cult classic films “Belly” and “After the Sunset” with Pierce Brosnan.

While Mr Easy’s catalogue classics continue to be staple selections by fans, world class sounds, DJs and radio personalities alike, new songs are buzzin’ in music spaces! Songs like “Praise Him,” “Ghetto Cry,” “Wish You Were Here,” “Friends Fi Life” and “Nah Nuh Style” are enjoying rotation across traditional and online radio stations. The Mr Easy effect is continuous and Saturday’s performance is an ideal addition to his growing entertainment brand.

In addition to a concert, the free community-driven “Angela Yee Day” event will provide school supplies, including bookbags and totes for 400 children thanks to The Lelievre Foundation and Backpack International, food from Chick-fil-a, and a LIVE art installation from Solidarity Moving. There will also be free haircuts from Studio31c, a braid battle featuring Mimi’s Braids, and a video game truck.

In 2018, the New York City mayor officially designated August 28th as Angela Yee Day, a platform that celebrates Yee’s Caribbean and Brooklyn roots while supporting local businesses. Her dedication to providing the community with information and access to culture, nutrition, financial literacy, and education remains the core of her philanthropy.