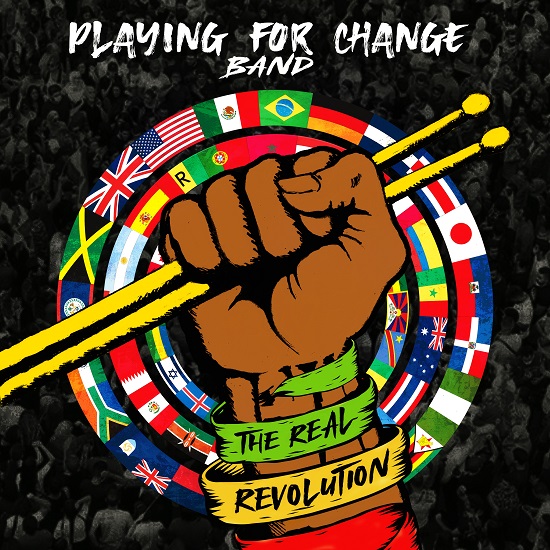 Playing For Change is proud to announce their debut album The Real Revolution featuring the Playing For Change Band! The new album is a purpose-driven record with a compelling message of connecting the world through music. The songs embody the spirit of love, truth and unity that binds us all together and leads us from the darkness to the light. Pre-save & order here: https://playingforchangeband.ampl.ink/TheRealRevolutionAlbumRelease

Although this is the first studio album from the renowned band, they have been a unique fusion of influences and talents in constant evolution since their start in 2008. The band currently consists of 10 musicians from 10 countries, carrying music from the streets to the stage to the hearts of people. Even though the musicians come from many different countries and cultures, it is through music that they speak the same language. It is a tangible, traveling representation of the Playing For Change mission: to inspire, connect and bring peace to the world through music.

The Real Revolution features members of the Playing For Change Band as well as special guests. The core group of 10 musicians from 10 countries recorded the new album over the course of five years as they toured the world to several different countries. The worldly influences are prominent in shaping The Real Revolution sound, and the body of work is a reflection of the power of the human spirit, witnessed first hand throughout their global travels.

The PFC Band recorded at the famous Tuff Gong Studio and teamed up with members of Damian Marley’s band to create an album that is a fusion of various languages and cultures, combining world music and reggae. Bob Marley has been one of the most pivotal figures in the DNA of Playing For Change and The Real Revolution is a celebration in that spirit of transforming people with music from the inside out. The record was produced by Mark Johnson, Mermans Mosengo, and Robin Moxey. Mixed by Greg Morgenstein at Astound Studios, Los Angeles, and mastered by Greg Morgenstein in Los Angeles.

The second release, “Me Pierdo,” written by Pierre Minetti, is a perfect blend of reggae and Latin music and speaks of the journey to our inner nature and the longing for freedom while feeling lost in a world full of injustice and stress. Tula Ben Ari comments, “I introduced the song to the band back in 2009 and it became a favorite in the band’s live show!”

The Real Revolution album will be released alongside the focus track “Run” due out on June 24, 2022. “Run” is an uplifting song written by PFC Band member Claire Finley that inspires feelings of hopefulness, focusing on the good in life instead of dwelling on the past. She comments, “When writing the song ‘Run,’ I thought it would be cool to play with the concept of running towards the good things in life instead of only focusing on getting away from bad thoughts or situations holding you back. In life, I believe it’s very important to think about the things you aspire to instead of continuing to dwell on situations of the past.”

The release of The Real Revolution album commences the 20 year anniversary of Playing For Change, with exclusively designed cover art by Neville Garrick (longtime Art Director for Bob Marley and the Wailers), and perfectly represents the PFC belief that music has the power to break down boundaries and overcome distances between people.