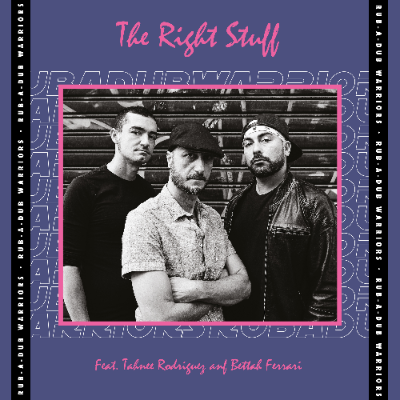 “Rubadub Warriors”, the first album by The Right Stuff is out.
6 classics of the international soul scene rearranged with a reggae sounds of the 1980s rub-a-dub period, made famous by artists such as Sly & Robbie and Roots Radics.

The album is the result of the experience gained by the trio during the Rub A Dub Sessions, a weekly live music event in which The Right Stuff hosted some of the best reggae and soul voices on the national scene. Therefore the idea of ​​conceiving an EP sung entirely by Tahnee Rodriguez, known for her collaboration with the national television program PropagandaLive, and Bettah Ferrari, Marco Mengoni’s backing vocalist, italian mainstream artist.

The tracks were recorded at one of the italian recording temples, Foward Studios. Together with the sound engineer Francesco Putortì they aimed to “capture” the vintage sound by exploiting all the analogue machines of the studios, creating a “classic” sound but at the same time with a fresh and modern appeal.

“Rubadub Warriors” contains a selection of representative songs of the soul of the last 60 years, starting from “It’s a Man’s Man’s Man’s World” by James Brown dated 1966 up to “Certainly” by Erykah Badu in 1997. The only song “out of genre” is “Mad World” by Tears For Fears chosen by the band for the message that resonates very topical in this difficult historical period.​

Rubadub Warriors is available on all major streaming platforms.