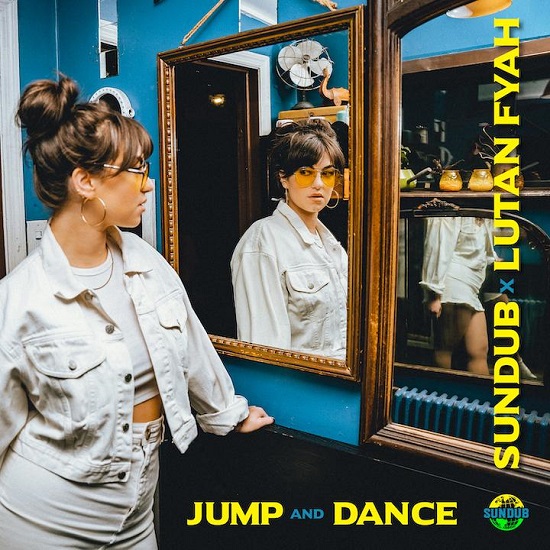 SunDub, the Brooklyn-based five piece who expertly mixes classic reggae with elements of soul and blues, is back with a new single, “Jump and Dance,” released on Easy Star Records. This danceable, grooving tune, featuring guest vocals by Jamaican superstar Lutan Fyah, is a perfect introduction to SunDub’s lush sound and the next phase they are laying out with their new album. The band describes it as “a simple set of directions for what listeners of this song will be doing – jumping and dancing, wiggling and turning, stepping to the left and to the right. It’s a feel-good song with a chorus full of inviting instructions to make sure new and old fans alike feel the groove with their whole body.” Stream and download the single at http://moremusic.at/JumpAndDance.

SunDub is a testament to the power of inclusion, diversity and unity; their music and community rallies around the concept that we are strongest when people of different backgrounds can work together to create positive change. These core values were first showcased on SunDub’s debut album, Burden of Love (2019), which has amassed millions of streams since coming out. Anchored by a core quintet—Finn Singer (guitar),Josh T Carter (bass), Eric “The General” Toussaint (vocals-keys) and the brother-sister team of Joanna Teters (lead vocals) and Ben Teters (vocals-drums)—the band is ready to breakthrough to even more fans worldwide with their sophomore album, showcasing the evolution of their sound over the past few years. Joanna Teters’ commanding and soulfully smoky lead vocals blend seamlessly with the air-tight arrangements of the SunDub rhythm section. The result is a stand out expression of reggae’s classic undulating pulse and lush subterranean grooves, reinvented for listeners of all times and genres.

“Jump & Dance” along with the rest of the upcoming album was recorded at Lydgate Sound in Kauai, HI, in May 2021. Joanna Teters explains, “We got an invitation to record at Lydgate Sound, a special studio located on a remote cacao farm. The island and farm envelope its visitors with lush nature and sweet sunshine, offering a beautiful kind of inspiration that can only come from being disconnected to our everyday lives and distractions.” Ben Teters enthusiastically adds, “We enlisted Sidney Mills (Steel Pulse) to engineer and co-produce the album. We worked with Sidney on our first album Burden of Love – the opportunity to go deep for two weeks in the studio with him took the project to new heights.”

Lutan Fyah has been releasing hit songs and featuring on numerous collaborations for years now, building a strong reputation for his smooth delivery, nimble wordplay, and positive messages. He has appeared on tracks with a huge and diverse list of artists, ranging from Rebelution, Turbulence, and Midnite to Rusko, Chopstick Dubplate, and Sara Lugo, and the list of his collaborations goes much further beyond those examples. Ben adds “As longtime fans of Lutan’s music, it is an honor to feature him in ‘Jump & Dance’ and to welcome him into the SunDub family. His vocal style is a perfect complement to Joanna’s – it really brought this track to the next level.”

Outside of the studio and off of the stage, the band members that make up SunDub put their talents to work in a myriad of ways: using their music as a platform to advocate for political movements, teaching music lessons to New York City youth, and collaborating with non-profits to create change, to name a few. Like so many other bands, SunDub was hit hard by the onset of the pandemic of 2020 — tours canceled, opportunities postponed, income lost. Instead of being discouraged, the band came together on a Brooklyn patio and figured out how to make the most of the situation. During weekly, COVID-safe live stream performances in the summer of 2020, SunDub raised over $1,000 for the NAACP Education and Legal Defense Fund, using their platform to rally their community around the importance of political activism and dismantling unjust racial and societal structures.

Joanna concludes, “Similar to the nature of the song ‘Burn Down The Place’ from our first album, this song is an invitation to join SunDub nation and join with us on a crusade to create positive energy and community around music. ‘Jump and Dance’ is our mission statement driving this new era of SunDub music, asking people to leave behind violence, judgment and pettiness, and instead, to join together for joyful moments centered around dancing and the belief that music can heal and unite.”