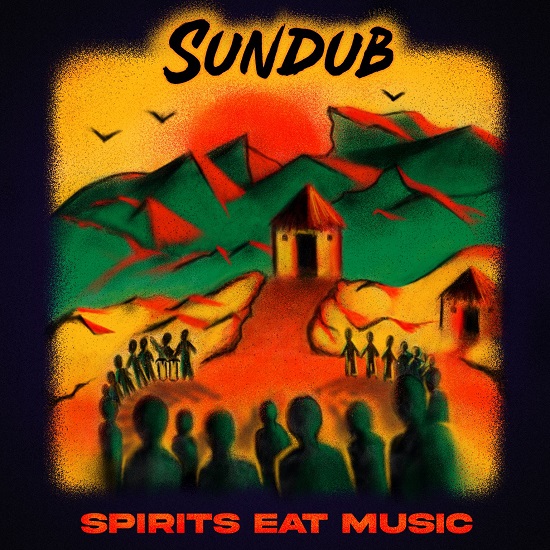 Earlier this summer, as they began rolling out music from their second full-length album, SunDub kicked things off by showcasing three diverse singles showing multiple facets of their musical approach on Spirits Eat Music. Starting with “Jump And Dance,” featuring Lutan Fyah, the Brooklyn-based five-piece delivered an irresistible feel good tune perfect for the warm summer months. Switching it up, next came the title track “Spirits Eat Music,” a catchy tune with a heavier theme that speaks to a personal message of love and loss for the band. The latest single “New Ways To Love,” featuring GRAMMY-winning vocalist Peetah Morgan (of Morgan Heritage), inspires an optimistic outlook towards life through its uplifting lyrics. The official video for the song (https://youtu.be/NTh2UPrsLZ0) was just released, further showcasing the playful and positive nature of the track. The video was filmed on location in Florida and was directed, shot, and edited by David Svedosh.
The three singles garnered positive press, accolades, and radio support from tastemakers, including BBC’s Sir David Rodigan, which added to the anticipation for the album. Now the wait is over with Spirits Eat Music finally dropping on all digital platforms through Easy Star Records. Simultaneously, vinyl and CD editions of the record can be pre-ordered, along with a new, exclusive T-shirt design. All copies pre-ordered will be autographed by the band. The physical versions of the album will be released January 13.
Spirits Eat Music was recorded at Lydgate Sound in Kauai, HI, in May 2021. Joanna Teters explains, “We got an invitation to record at Lydgate Sound, a special studio located on a remote cacao farm. The island and farm envelopes its visitors with lush nature and sweet sunshine, offering a beautiful kind of inspiration that can only come from being disconnected to our everyday lives and distractions.” Ben Teters enthusiastically adds, “We enlisted Sidney Mills (Steel Pulse) to engineer and co-produce the album. We worked with Sidney on our first album Burden of Love – the opportunity to go deep for two weeks in the studio with him took the project to new heights.”
SunDub is a testament to the power of inclusion, diversity, and unity; their music and community rallies around the concept that we are strongest when people of different backgrounds can work together to create positive change. These core values were first showcased on SunDub’s debut album, Burden of Love (2019), which has amassed millions of streams since coming out. Anchored by a core quintet—Ben and Joanna, along with Finn Singer (guitar), Josh T Carter (bass), Eric “The General” Toussaint (vocals-keys)—the band is ready to breakthrough to even more fans worldwide with their sophomore album, showcasing the evolution of their sound over the past few years. Joanna Teters’ commanding and soulfully smoky lead vocals blend seamlessly with the air-tight arrangements of the SunDub rhythm section. The result is a stand-out expression of reggae’s classic undulating pulse and lush subterranean grooves, reinvented for listeners of all times and genres.
Outside of the studio and off of the stage, the band members that make up SunDub put their talents to work in a myriad of ways: using their music as a platform to advocate for political movements, teaching music lessons to New York City youth, and collaborating with non-profits to create change, to name a few. Like so many other bands, SunDub was hit hard by the onset of the pandemic of 2020 — tours canceled, opportunities postponed, income lost. Instead of being discouraged, the band came together on a Brooklyn patio and figured out how to make the most of the situation. During weekly, COVID-safe live stream performances in the summer of 2020, SunDub raised over $1,000 for the NAACP Education and Legal Defense Fund, using their platform to rally their community around the importance of political activism and dismantling unjust racial and societal structures.
SunDub’s spiritual and altruistic themes are found on the whole album combining with different moods on the record – from the romantic to the political to the hedonistic – to provide a catchy and complex statement of the moment from this young band, which rewards with repeat listens of the entire sequence.
Tour Dates:
11/17 @ Deep Dive – Ithaca, NY (w/ Baked Shrimp)
11/18 @ 99 Franklin – Brooklyn, NY (Official Record Release Party)
11/20 @ Higher Ground – Burlington, VT
11/26 @ Colony – Woodstock, NY
Connect:
https://sundubmusic.com/
https://www.facebook.com/sundubmusic
https://www.instagram.com/sundubmusic/
https://www.tiktok.com/@sundubmusic
https://twitter.com/sundub_music
https://www.youtube.com/c/sundubmusic
2022 Easy Star Records SunDub
Share. Facebook Twitter Email Telegram WhatsApp
Previous ArticleSANCHEZ – SOMETIMES WHEN WE TOUCH – TM AND GOD ALONE (2022)
Next Article Rocky Dawuni Nominated for GRAMMY for “Best Global Music Performance” for “Neva Bow Down” feat. Blvk H3ro​ ​
Advertisement